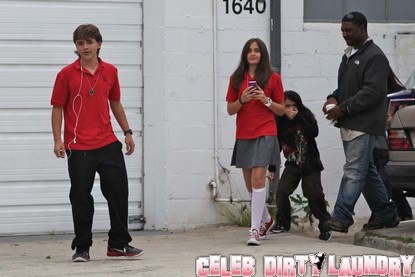 Michael Jackson’s children Prince Michael Jackson, 14, Paris Jackson, 12, and Prince Michael Jackson II aka ‘Blanket’, 9,are seen leaving their acting classes in Hollywood Los Angeles, California today May 17th, 2011.  An odd activity for his children considering Michael did his best to keep them out of the public eye.   The family is said to be trying to have the children live a more normal life.  The children now go to a regular school, for the first time in their lives, they have previously been home schooled.  The kids certainly look like normal, healthy children!

Katherine Jackson, 80,  their grandmother recently revealed what two of  Michael’s children want to do with their life. Prince wants to produce movies and Paris wants to be an actress.  Paris was even said to have auditioned for a play.

All three kids live with their grandmother Katherine Jackson in what is known as the Jackson family compound.  Michael’s sister La Toya who was recently on Donald Trump’s Celebrity Apprentice is said to be playing a large part in their upbringing and said that they were thriving in their life now.