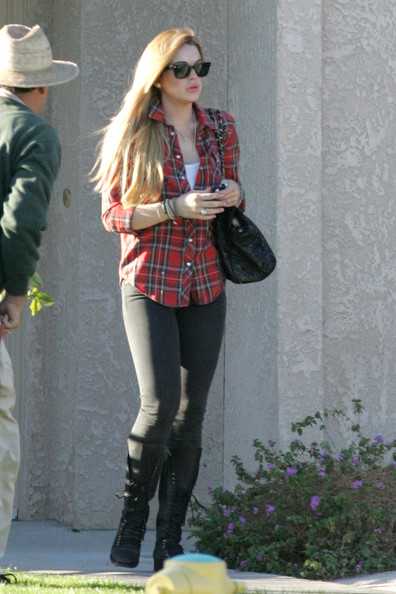 Douchebag of the year Michael Lohan who promised he would never speak to the press again and would most certainly never air his daughter Lindsay Lohan’s “dirty laundry” is of course doing just that.  Michael is warning Lindsay of course publicly and broadcsting it to the world that her battle with alcohol and drugs will never end.  Of course Michael also says he is there for her bla bla.  If the moron wants to be there for her and help her he has to learn to shut his mouth to the press and tell her these things in private.

“You have to fight it for the rest of your life and it is a fight. Do I have faith that she can do it? Absolutely. A lot of people do. It’s still a long road and a tough one, but I have faith in her.”  “I’m here for you. You know that I am, and I don’t want you to be put in the middle anymore.”

You don’t have to carry the weight of the world on your shoulders. It’s not your job and if anyone comes between you and something you love or something that is important to you, you just have to tell them they can’t be a part of your life.

“Your life comes first, your sobriety, your health. As far as I’m concerned my family comes first, and that’s you.”

Who in the world gave this dude a job as a rehab consultant?  He claims he wants to help Lindsay – well helping her would mean not having these ridiculous interviews with the press every chance he gets.  He is such a media whore it is repulsive.   Why does he feel he has to broadcast all his family’s business to the world?