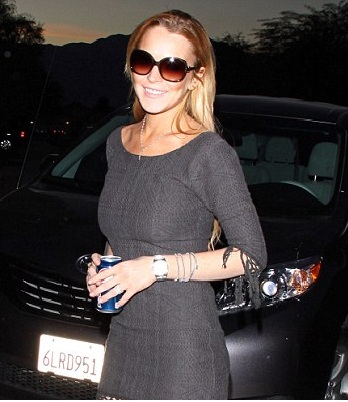 Michael Lohan’s vow to never discuss Lindsay Lohan’s business in public again has been broken.  According to daddy Michael, Lindsay Lohan has passed 10 drug and alcohol administered at random times in the two weeks since she has left the Betty Ford Center.

The 24-year-old ‘Mean Girls’ star has to submit to a series of randomly administered drug and alcohol tests as part of her legal conditions.

‘Lindsay is doing four or five tests a week and she has passed all of them with flying colors,’ Michael said.

Lohan has been living a low key lifestyle since she was freed from the court ordered program and spent Sunday night at home watching the Golden Globes on television.

Michael said  ‘She’s doing really great right now,’ and added ‘She is serious about staying healthy and is avoiding all the old things she used to do.’

Lindsay’s next court date is February 25, 2011, when she’ll face Los Angeles Superior Court Judge Elden Fox.  The Palm Desert police report relating to an alleged assault of the ex-Betty Ford employee, Dawn Holland, was delivered to the judge and placed under seal.  Sources said that the judge read the report and placed it in Lindsay’s file and based upon it will not be taking any action against Lindsay.