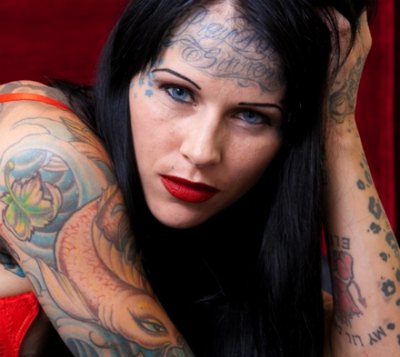 Well color me surprised! Apparently, Michelle “Bombshell” McGee really doesn’t know how to shut her pie hole about her ex-boyfriend, Jesse James. Hasn’t she done enough by swaying Jesse to the tattoo’d dark side, away from his wife, Sandra Bullock?

Now, she’s speaking out again — and it’s about their SEX LIFE. Ha. Can you imagine the Vanilla Gorilla is getting down and busy, thinking he’s mastering the Kama Sutra with you — and then BAM — she’s asleep!

In a new interview with Wendy Williams, Michelle called their sex “average” and said that her interview with him was a little strange. She said, “It was kind of weird…he asked me to sit on the couch next to him and watch a movie. It was very 12-year-old and he kind of did the whole like reaching around and that’s where he started kissing me…it was very awkward.”

Still, awkwardness aside, she still had sex with a married man. Tsk, tsk. And that’s not all, either. This crazy broad wants to put out the word that she finds Sandra attractive. Ugh. She added, “I love Sandra Bullock, I’m a huge fan. She’s hot. She’s really cute.”

Aren’t her fifteen minutes up yet???