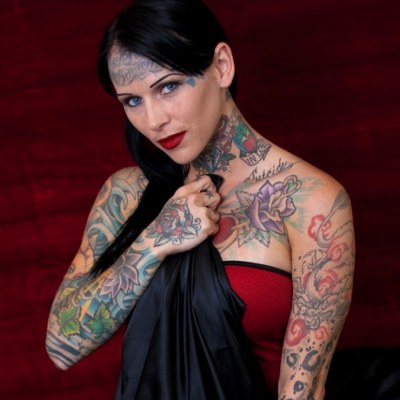 The more that Michelle “Bombshell” McGee runs her mouth about the whole Jesse James getting married thing, the more I think that she’s jealous of Kat Von D’s relationship with that twit.

Earlier this week, Michelle Homewrecker said that Jesse is a pig, always was — and always will be. Now, she’s going even further to say that Jesse won’t make it down the aisle to get married.

We caught with Bombshell last night outside of Pure Platinum in San Diego where she told us she doesn’t talk to Jesse anymore, but she did hear about his engagement. She told us, “I would be surprised if they made it to the altar. But hey, I thrown divorce parties too, right?”

Awww…Poor tattoo’ed up Nazi girl that no one famous wants to love. I wish I could feel sorry for her, but I really don’t. She needs to stop courting the press and shut her trap. No one cares about her opinion.