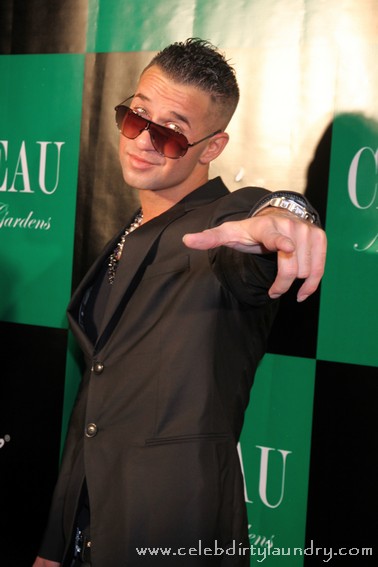 That Mike ‘The Situation’ Sorrentino was mostly hot air is no recent discovery but the Jersey Shore abdominal man proved to be totally talentless at The Comedy Central Roast of Donald Trump.

We learned that dancing was not the Situation’s forte after seeing his abysmal performance on DWTS and now comedy can be stricken form the list of Mike’s talents.

Here’s an example of one of Mike’s ‘jokes’:

“People are hating on him because Trump is always firing people, but it’s kind of OK because he completely let himself go anyway.”  This was greeted by groans in the audience.

He also took a shot at comedian and fellow Trump roaster Whitney Cummings, asking her if she was a chick. “On the Jersey Shore we call ugly chicks grenades, but I actually wouldn’t call you a grenade because you aren’t blowing up anytime soon.”  The audience didn’t know how to react and neither did the usually self-mocking Cummings.

The Situation then turned his ‘humor’ on comedy vet Jefferey Ross, saying: “You and me have a lot in common, buddy.” “We’re both from Jersey, and tonight’s my first night doing comedy.”  “It’s also your last night, just so you know,” Ross shot back.

Comedy requires a quick intelligence, vast general knowledge, and the ability to gauge an audience – is it any wonder The Situation flopped?