Miley Cyrus Is The Worst Celebrity Influence On Children, Again 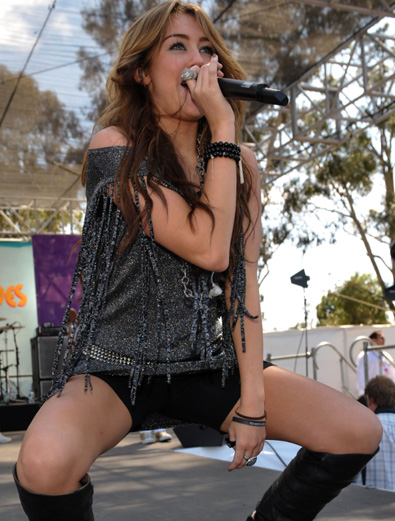 In a poll of almost 100,000 children aged 9 to15, Miley Cyrus gained the dubious distinction of being the worst influence.  The 18-year-old singer-and-actress topped the poll for the second year in a row on AOL’s JSYK.com (Just So You Know) – a website targeting nine to 15 year olds – taking 58 per cent of the 99,000 votes.

Miley had a controversial 2010 after video footage showing the ‘Last Song’ star inhaling smoke from a bong – a filtration device usually used for smoking marijuana – was posted on the internet.

Visitors to the AOL website slammed her for her “poor” choices with one user called Leanne saying: “Just because it is legal, doesn’t mean it’s good for you! cigarettes … Those ARE LEGAL but people die from them every day. She’s just not making the right choice.”

Chelsea12Chel wrote: “Really girlfriend you are setting a really BAD example for your fans. They looked up 2 u. And I wanted they 2 look up 2 u, because you are awesome and a really preaty girl. But now I am going to have 2 set down and think about them looking up 2 u. (sic)”

Miley had to defeat some serious competition in the poll to ‘win.’   The gang of also rans for worst influence included Demi Lovato and Lindsay Lohan – perpetual rehab attendees, ‘Teen Mom’ star Amber Portwood, Kanye West and ‘Gossip Girl’ star Chace Crawford who was arrested for possession of marijuana.

Well Miley – you have come a long way from Hanna Montana – a long way DOWN.  What do you think?  Do you agree with the poll?