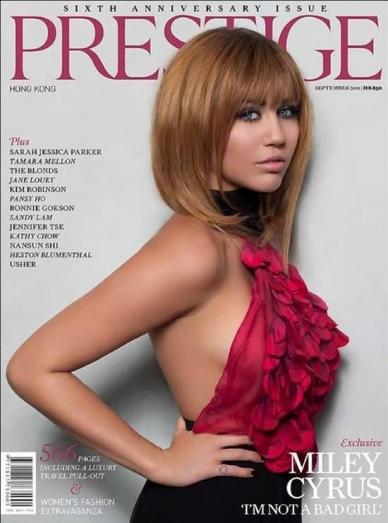 While Miley Cyrus is doing just about everything she can to sexify her former good-girl image the former ‘Hannah Montana’ star states ‘I’m not a bad girl.’

At least that is what is emblazoned on the September issue of Prestige showing Miley braless and with a sharp adult-looking new hairdo.  Miley is trying too hard to grow up – or at least appear that way.

Miley discusses her career speaking about the film ‘So Undercover’: “I’ve got kind of a weird, dark sense of humor, really dry humor, so I would love to do more comedies. But not the comedies that people have seen me in. There’s a comedy that I’m working on now and it’s something a little darker.”

Miley is known to dress in racy clothes and perform racy dances while on stage and these photos make the starlet look older and more mature.

Miley Cyrus is only 18 years old and she hopes to have a long career ahead of her. She has clearly struggled with the transition of her image from all-American goody goody child star to sexy young adult woman. Experts say she has alienated a large portion of her audience and fans along the way – her record sales are down. This is another attempt to make the new Miley Cyrus.