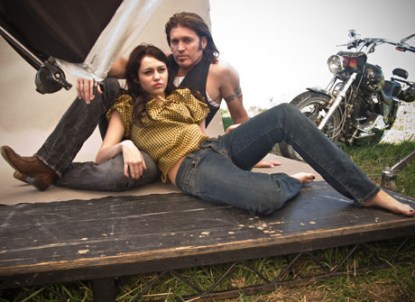 Billy Ray Cyrus has major regrets about the Miley’s role in Hannah Montana and resents the role he says her aides played in breaking up his family.

Billy Ray and his wife Tish filed for divorce in October and 18-year-old Miley has been hit with a string of scandals in recent months, including gossip about her turbulent love life and outrage over footage of her smoking drugs from a bong. Billy Ray is convinced his family’s problems stem from the huge success of  Hannah Montana  – and he’s also blasted his daughter’s aides for creating a rift between the him and his daughter.

In an interview to America’s GQ magazine Billy Ray is quoted as saying, “The damn show destroyed my family… I hate to say it, but yes, I do (wish the show hadn’t happened). I’d take it back in a second… .”

“Every time (Miley’s) train went off the track… her people, or as they say in today’s news, her handlers, every time they’d put (the blame on) me… I took it because I’m her daddy… OK, nail me to the cross.”  “I’m scared for her. She’s got a lot of people around her that’s putting her in a great deal of danger. I want to get her sheltered from the storm.”

Billy Ray also claims he refused to attend Miley’s 18th birthday party in November because it was held at an over-21s bar and he feared he’d be blamed for leading his daughter astray.

He is quoted as saying, “You know why I didn’t go?  Because they were having it in a bar.  It was wrong.  It was for 21 years old and up… all them people, they all wanted me to fly out so that then when all the bad press came they could say, ‘Daddy endorsed this stuff’.  I started realising I’m being used.”

Billy Ray also admits confronting his daughter’s aides after the bong scandal broke, adding: “They told me it was none of my business… I should have said, ‘Enough is enough – it’s getting dangerous and somebody’s going to get hurt’… Honestly, I didn’t know the ball was out of bounds until it was way up in the stands somewhere.”

Well Billy Ray can say what he wants to NOW but he was the primary mover in making Miley Cyrus the mega superstar she is today.