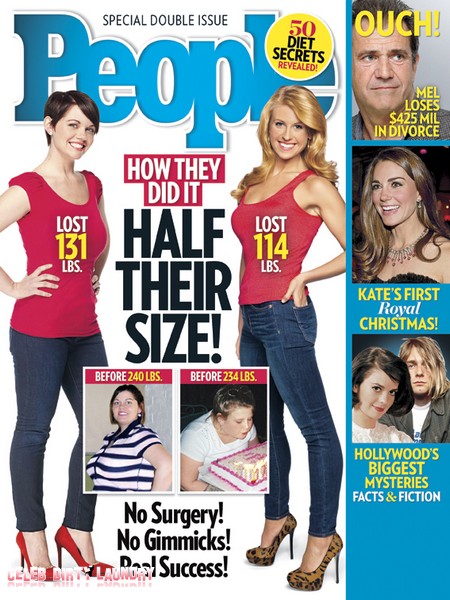 The current issue of People Magazine is a special double issue and features the cover story ‘How they did it – half their Size.’  The magazine has all the details of how Miss South Carolina Bree Boyce and others lost over 100  lbs and their success stories.   They achieved real success without surgery or gimmicks.  People has all the before and after pictures of real people who lost 1/2 their size.

People magazine has more: “I used to make fun of my weight with others to fit in and be the funny, overweight girl,” Boyce, 22, tells PEOPLE in this week’s annual Half Their Size cover story.   “I’d go home and cry, not because of what others had said about me, but about what I had said about myself,” she adds.

“It was embarrassing because a 17-year-old shouldn’t be sitting in a doctor’s office having this kind of conversation,” says Boyce. “I knew there were so many things I wanted to do in life – I wanted to be on Broadway, go to school, get married, have a family.”

After three years of losing a whopping 100 lbs Bree will compete in the 2012 Miss America pageant on Jan. 14, 2011.  Also included in this week’s issue the magazine has all the details on Kate Middleton and Prince William‘s first Chistmas together.  They also have the details of how Mel Gibson lost $425 million in his divorce settlement to his ex-wife Robyn.

To read all the success stories, see all the before and after shots, pick up the current issue of People Magazine which hits stands Friday!