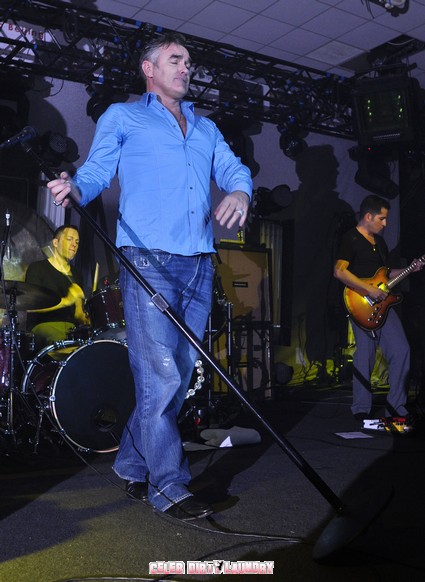 Morrissey, born Steven Patrick Morrissey, has attempted to tarnish The Queen’s 85th birthday celebrations by launching a fresh attack on the sovereign.  The staunch anti-royalist who is ‘The Queen is Dead’ singer has dubbed Elizabeth II “the ultimate dictator” in a new British newspaper interview.

And he warns his fellow Brits not to be fooled into thinking she’s a lovely grandmother, adding, “She would not hesitate to turn her tanks on the British people.”

Morrissey tells the Telegraph, “The royal family, to me, are not England, and they are not the flag. So, therefore people can become misguided into believing that the Queen is the heart of England, and that she represents England. But she doesn’t in the least.”

“There are people like me who were not interested, and we’re many in number, and we’re not easily fooled. And we see the Queen as the ultimate dictator. And it is dictatorship. It’s forced upon the British people.”

“Of course, if the British people decided tomorrow that the Queen must go, then the Queen wouldn’t hesitate to turn her tanks on the British people. It would happen. Because the police are commissioned to protect the Queen against the people of England. That’s their first and foremost task. And I find that absolutely absurd.”

Oh Boy – can somebody give this guy a tranquilizer, or several?  Does Morrissey think we are living hundreds of years ago when British Royalty actually ruled?  Apparently he does- but these days The Queen could not exercise the power to order an arrest, let alone tanks into the streets.    Morrissey is fighting a battle won long ago.