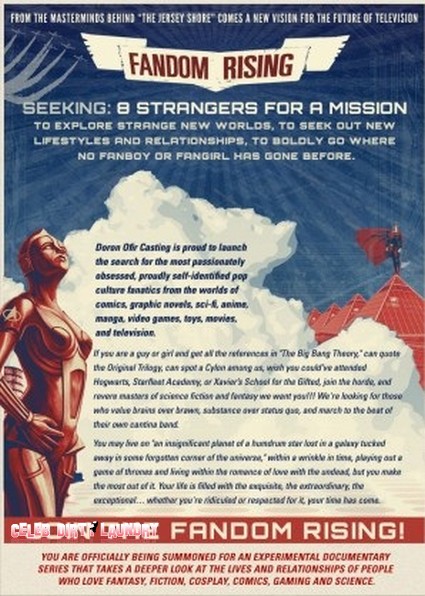 After making MTV’s most popular show ever, ‘Jersey Shore,’ the production company behind the mega-hit have announced this week that they’re currently looking for a total of eight cast members for a brand new show. This show is going to be called Fandom Rising, and what they seek are people who’re incredibly and proudly obsessed with comics, sci-fi, graphic novels, manga, anime, video games, toys, movies, and television – in other words genuine nerds!

The show will be looking to focus on these nerdy peoples’ lives and their love of fantasy, comics, gaming, science, cosplay, fiction, and etc., sort of a showcase for people that the cast of Jersey Shore would definitely call ‘losers.’ I actually think I will enjoy this show.., since I’m a self-proclaimed anime, manga, gaming, and movie fanatic, I think I’ll actually be able to relate to some these people. Can they be any worse than Snooki or The Situation?

I believe strongly that this show is going to be a lot better than Jersey Shore, because Jersey Shore has way too much idiotic melodrama that really just makes you laugh – but not only because these moments are funny but are also hilariously pathetic. I think that this new show will have less drama and a more positive and realistic view on a typical nerd’s life, so I can tell you that I’m going to watch this show when it comes out.

Also – should you feel that you qualify – the show is taking applications to be on their show here http://www.fandomcasting.com/