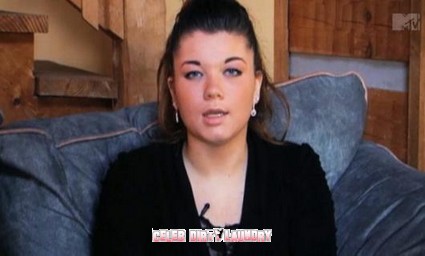 Teen Mom Amber Portwood is not in good shape. Not only has she criminally assaulted her baby’s daddy, Gary Shirley, but she also attempted suicide last month and had to be hospitalized.  The out-of-control reality star chose to get help and checked into Seasons Recovery Center in Malibu.

The party kind enough to step in pay for the expensive treatment remains unknown. “I don’t know who is paying for it,” a source said. ” All I know is that it’s a lot and someone with money is paying.” Could it have been Gary or her family who secretly paid the bill? As more details emerge, it doesn’t seem likely.

Amber’s brother Shawn Portwood says that while his sister was in rehab, the cameras were rolling. MTV wasn’t about to miss out on an opportunity for entertainment although Amber’s brother said “Her doctor and I do not agree with it, but there’s nothing I can do.”

Sounds like MTV has stepped in to pay the Seasons Recovery Center for Amber’s treatment so that they can profit from her misery. MTV is clearly more interested in televising Amber Portwood’s struggle with her mental health than just leaving her to follow her doctor’s orders.

I guess that ‘anything goes‘ is the standard, of lack of any standard, on TV today. But when a show’s producers actually go against a doctor’s advice and decide to film anyway have things gone too far?