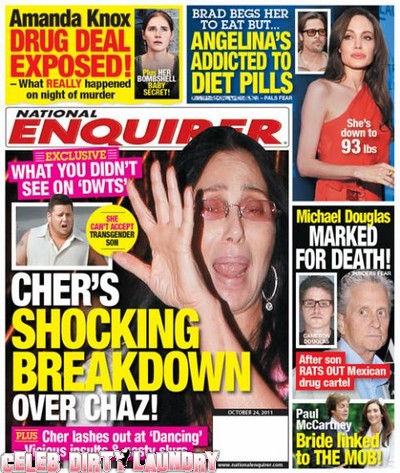 The October 17th, 2011 issue of National Enquirer features the cover story “Cher’s Shocking Breakdown over Chaz.”   The magazine claims they have all the exclusive details about what we didn’t see on Dancing With The Stars. They go on to say Cher has lashed out at DWTS over vicious insults and nasty slurs against her son Chaz Bono.

Cher was at Chaz’s last performance on Dancing With The Stars where she clapped and cheered him on.   But even all the clapping from his proud mother did not help his performance.   Perhaps Cher was not happy with the judges comments about her son’s performance but I think they were fair.  After the low scores, Chaz was voted to come back next week.

About his last performance, Bruno said: In the true spirit of Rocky no matter how many knocks you take you keep coming back. Carrie Ann said: you make me cheer for you, I had to cry. It was something magical. Len said: Well like Rocky you are getting stronger. It was not exactly a knock out performance but it was your best dance tonight.

Also included in this issue they are exposing Amanda Knox‘s drug deal and claim they really know what went down the night of the murder.  Also featured Angelina Jolie is starving herself again and Brad Pitt is distressed and he is begging her to eat.  She is down to 93 lbs and they claim she is addicted to diet pills.

Do you believe any of this?   If you do, pick up the current issue of National Enquirer to find out more!