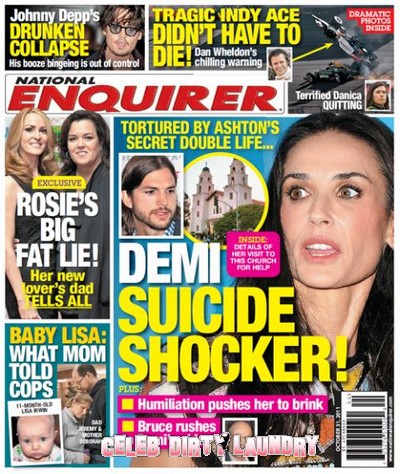 The October 24th issue of National Enquirer features the cover story ‘Demi Moore Suicide Shocker.’  Is Demi Moore is being driven to suicide by Ashton Kutchers‘ infidelity?  All indications are that Demi is at the brink of personal catastrophe after her Husband’s affair with Texan party girl Sara Leal became public knowledge.

Still desperately in love with the much younger Ashton, Demi is frantically trying to get a grip as she drowns in a sea of insecurity, heartbreak and humiliation.

Demi has been pushed by Ashton’s infidelity right back into the still waiting arms of ex-husband Bruce Willis’ for support.  Bruce is irate with Ashton and ready to intervene to save Demi.

Demi and Bruce were married for 13 years and have 3 daughters together so it is no surprise that Bruce is enraged with Ashton and intends to set him straight.  Humiliating Demi and causing her such upset has put Ashton where he should expect some ‘Die Hard’ intervention.

Sara’s revelations are not helping the situation: Sara told The Sun newspaper: “We had sex twice. Everything felt natural. We were having a good time. One thing led to another. He was good but it wasn’t weird or perverted or creepy. I was attracted to him and he was attracted to me. He had great endurance. We were up for a while. It was about two hours.”

No wife wants to read something like this about the man she loves, let alone Demi who is already insecure about being married to a much younger stud like Ashton.  Suicide can be a cry for help as well as a desperate attempt to escape from feelings of intense depression.  Has Ashton Kutcher pushed loyal Demi too far.