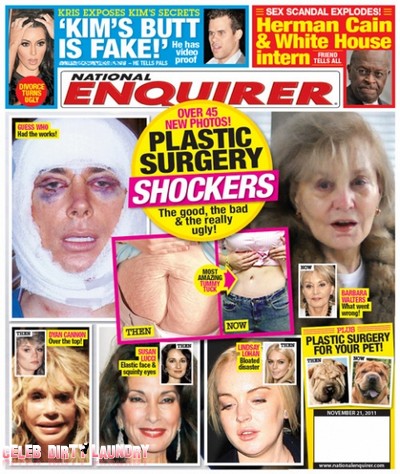 The current issue of National Enquirer features the cover story ‘PLASTIC SURGERY SHOCKERS: Nip, Tuck & Yuck!’   The magazine claims that this week they have 45 photos of the good, the bad and the really ugly celeb plastic surgery pics!  They have a picture of the most amazing tummy tuck on the cover and the before picture looks like someone’s butt (maybe Kim Kardashian’s LOL) but seriously it is suppose to be a stomach and the after pic is pretty amazing.  They also claim that Kim KarTRASHian’s butt is fake.  No surprise here, there is nothing real about the girl!

The magazine cover features several celebs including Dyan Cannon who they say went over the top with cosmetic surgery and All my Children star Susan Lucci who they say has an elastic face and squinty eyes.   Of course they could not forget Lindsay Lohan whose face is a disaster.  Lindsay has had so much plastic surgery she does not even look like her anymore.  I would classify her in the really bad!

Also included in this week’s issue they have the details on how Kim Kardashian and KKris Humphiries divorce has turnedgasp, oh no, ugly…

To see all the pics and read more about this, pick up the current issue of National Enquirer!