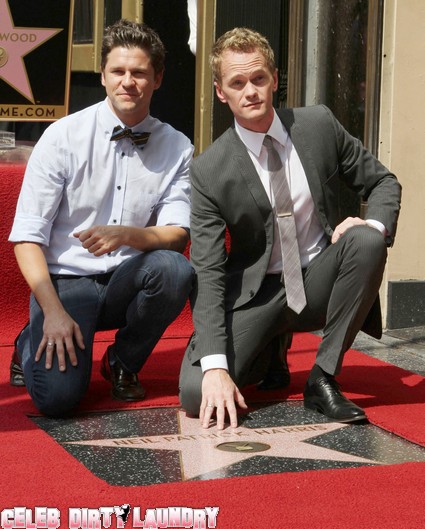 Neil Patrick Harris, star of “How I Met Your Mother” and friends turned out to celebrate the famous actor’s star installation on the Hollywood Walk of Fame on Thursday September 15th, 2011. Harris, whose career took off with his infomous role as child doctor “Doogie Howser MD,” was recognized today after having been in showbiz (both television and Broadway) for 23 years.

Harris’ “Mother” costar Jason Segel joked: “Neil has been entertaining us in television, stage, the Internet and film for over 60 years.”  In Harris’ acceptance speech he thanked  the Hollywood Chamber of Commerce for the honor.   He joked laughed about the fact his star was put  in front of: legendary dive bar the Frolic Room.  He jokingly said: “This won’t be the first time I’ve been plastered on the sidewalk in front of the Frolic Room.”

Harris showed up at the ceremony with his fiancé David Burtka as fans cheered behind barricades.