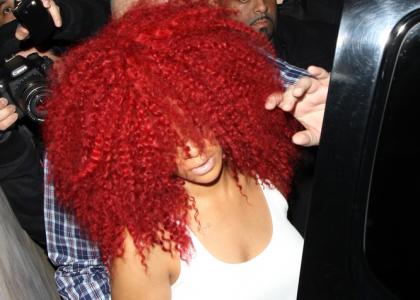 Posts of an alleged excerpt from an upcoming book called ‘Low Down Dirty Shame’ refers to Rihanna involved in a lesbian relationship with the book’s author, Natajah ‘Tajah’ Burton.

Tajah Burton, is a model with a gigantic forehead and shares her experiences as a lesbian in Hollywood, discloses details of past dates with A-listers, tells all about swinging sex parties, and claims people would be “shocked and stunned” by  what she has seen and what she knows about many of today’s most popular celebrities.

Mediatakeout.com published the following: “A friend of mine introduced me to this Barbadian pop R & B artist (Rihanna) a while ago. I had heard her music numerous times and was a fan of her unique sound.  I jokingly told him I wanted to talk to her. He told me on the sly that he wasn’t sure she was into women but that he would confirm.”

The transcript goes on to claim that numbers were exchanged, the two women had an “instant connection” and that “sex came up immediately, she was a freak”

Tajah confirmed that she had a relationship with a “famous female R & B artist” but refused to name names as she says she not want to be responsible for outing people against their wishes.  Give me break Tajah, that sounds like a pile of bulls**t!   After all Tajah just wrote a tell-all book all about the sordid sex lives of stars.

Tajah said that she believes the singer had dated women before and that they had a passionate fling that ended when their schedules became busy and it was difficult to find time to see each other.

Tajah added that she also dated “a very well known actress, a lot older, who also worked as a model” and a “well known female reality TV star.”

She says that the actress, a very well respected figure in the African American community, was not officially out as a lesbian but that it was the “worst kept secret in Hollywood.”

Tajah concludes: “I feel it’s my duty to bring awareness to people that may be struggling with their sexuality that there are a lot of people that they may look up to that are actually, privately gay themselves. When I was growing up within a Christian family I prayed every night not to be gay and it was a tough time for me, I felt I had no one to look up to.”

Nice touch Tajah – trying to make her tell-all book sound like a public service gesture – not the greedy grab for money that it surely is.