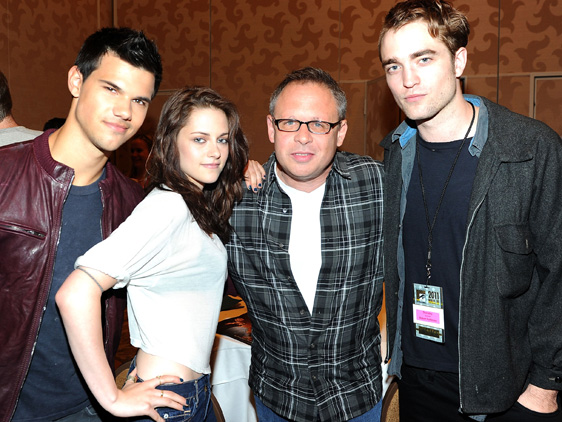 The countdown for Breaking Dawn Part 1 is on, and you can bet I am on the edge of my seat with anticipation!  I’ve been waiting for this for the past 4 years and the time is almost upon us when Edward and Bella marry and..well you know – do the deed!

I discovered a little bit of info that I was unaware of – I know shocking right – pertaining to a little pre-production meeting director Bill Condon had with Robert Pattinson.  Bill admitted recently that Rob was very instrumental in developing a particular scene in the movie.

“I met with Rob a couple of months before we started, and we were having a general talk about everything about Twilight. He mentioned something that I hadn’t known before: one thing he’d been playing through out those first three movies [as Edward Cullen] was a man who was filled with regret, self-loathing.”

That’s my Rob, always thinking outside the box.  Bill said that Rob spent a lot of time getting into the head of his character Edward, particularly how he dealt with his guilt (in killing humans in the 1930’s) in Stephanie Meyer’s unfinished book, Midnight Sun.

“Edward realized he’d turned into a monster, and it was something that really weighed on him. Now he’d been playing with that across three movies, but it was barely mentioned in those movies. I went back and worked with screenwriter Melissa Rosenberg and we put that into the beginning of the movie. So you understood where Edward was coming from and then you were able to watch him shed that because the person he cared most about said, ‘OK, I see that but I accept you anyway,’ and then he’s able to accept himself. So much stuff comes out of working with the actors.”

Have I mentioned how much I love him and can’t wait to see this movie?