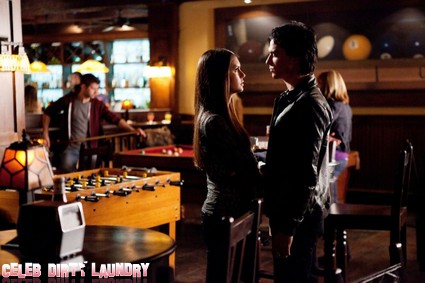 When The Vampire Diaries returns with the mid-season premiere of Season 3 on January 5th, 2011 it looks like Elena may be ready to move on with Damon.  Elena tells Bonnie in the new episode called “The New Deal” that Stefan has betrayed them.  At the end of the mid-season finale Elena decided she was going to let Stefan go.  So that leaves the door open for Damon.

The CW released new pictures for the January 5th & 11th episode and it looks like Elena (Nina Dobrev) and Damon ( Ian Somerhalder) are getting cozy and perhaps giving in to some of the sexual tension between them.  Check out the pictures below!  With Stefan out of the picture – it certainly gives Damon the perfect opportunity.

Julie Plec, Executive Producer recently said, “After learning the Stefan she knows is gone forever, Elena would realize “that ultimately it’s time for her to move on with her life and not hold onto a ghost of her past.  Now that Stefan is out of the picture, in her mind there’s a way to free herself up and allow that tension [with Damon] to come out and play.”

She went on to say, “The question of ‘Does Elena love Damon [and] has she been fully falling for him all along?’ is going to be very much a part of the season.”

What do you think, who should Elena be with?  Are you team Stefan or team Damon?  Sound out in the comments below!