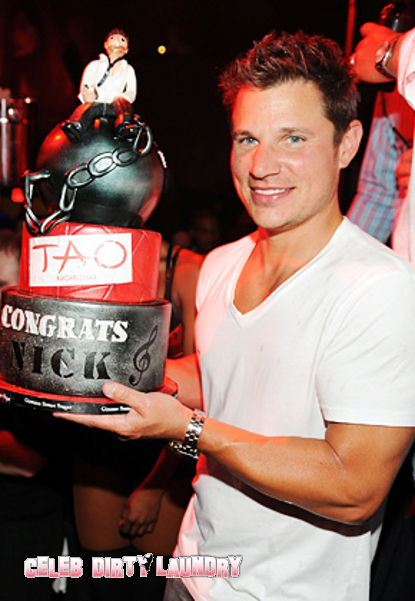 It’s about time for Nick Lachey and Vanessa Minnillo to tie the knot, but before the couple gets hitched , Nick let loose in Vegas with thirty of his closest friends for a wild-and-crazy (I’m assuming there was a little bit of crazy) bachelor party.

The 37-year-old celeb partied hard at the TAO nightclub, where he was presented with a black-and-white cake that read “Property of Vanessa.” Nick and his soon-to-be wife are keeping the actual wedding date and specifics on the down low, but Best Man and brother, Drew Lachey, hinted that “It could be any day now.“

Lots of people were spotted at the party, including Jeff Timmons (now a Chippendale’s performer in Vegas),  Justin Jeffre, Matt Leinhart and Geoff Stults.

The couple is set to televise (shocker, huh?) their special day on TLC, though they say the TV special will bring something different to the table. Hmm. I don’t see how you can make yet another televised wedding super-de-duper unique, but we’ll give them a shot at least, right?

“We kind of wrestled with that for a while, for obvious reasons. Having done reality TV in the past, I didn’t necessarily want to jump right back into it without having thought it through to great length. And we did . . . It’s a one-off special, a chance to kind of have a great experience and a great moment in our lives documented on TV, and also for us, to have a great wedding video . . . This is a different process [than ‘Newlyweds’] . . . There’s a beginning, an end, and then it’s over, it’s done.”

So, there you go. Are you excited to watch the Minnillo-Lachey wedding coming up? I suspect it will be soon, so get super pumped. **rolls eyes at the thought of yet another TV wedding**