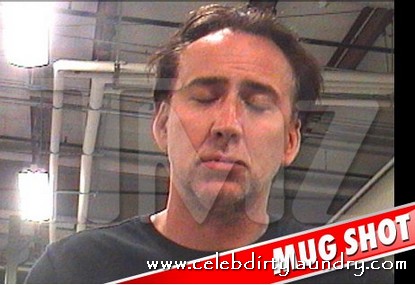 Nicolas Cage was arrested early this morning in New Orleans, where TMZ reported that he was daring police to arrest him. This was after a loud argument with his wife, Alice Kim.  Nic was supposedly “very drunk” while on the streets, when a taxi driver saw him and Alice arguing on the sidewalk.

The driver then proceeded to call the police, and reported to have seen Cage not only screaming and yelling, but also pushing Alice. When the police showed up, they ordered Cage and his wife to return home. Nic then told the cops, “”Why don’t you just arrest me?” The cop repeated for the couple to go home, but then Nic continued to taunt him.

The police accepted his request and arrested him for domestic abuse and disturbing the peace. Nic is still in custody and will be facing a bail hearing shortly. Alice Cage is not a complaining witness and is reporting that there was no physical contact. She does not want him charged.