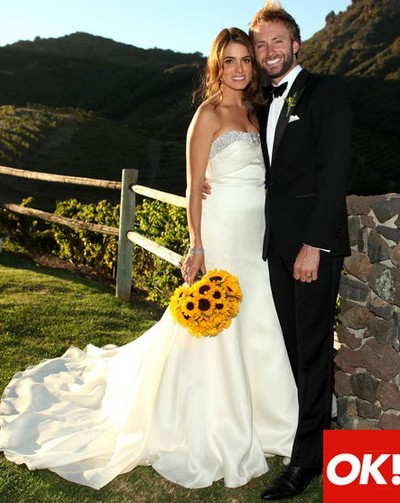 Fans are familiar with Nikki Reed and Paul McDonald from the Twilight franchise and American Idol, respectively – but as of earlier this month we now know them as newlyweds. And quickly to the aisle they went!

After Nikki and Paul met shortly after he finished his run on Idol a mere 7 months ago (which is forever in Hollywood right?), the two didn’t waste any time to say there I do’s. So now fans don’t have to wait to see what the cute couple looked like on their big day as they recently opened up to OK! Magazine to reflect on their ‘sun-kissed’ ceremony.

According to the magazine, Nikki revealed:

“It was an outdoor wedding in Malibu, with camels and zebras and yaks running around. We chose a place that felt funky and unconventional. We wanted it to feel kind of like an outdoor music festival.”

The bride dazzled in a Tacori dress with a 6 foot train covered in 120 diamonds, while the couple was surrounded by close family and friends and only a few Twilight cast mates.

For more on the newlyweds, check out the newest addition of OK! Magazine.