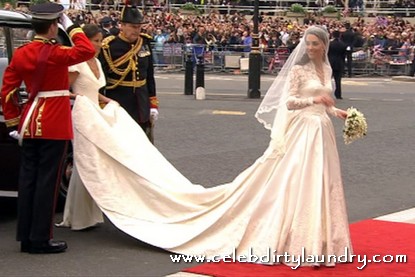 Kate Middleton‘s wedding dress has inspired a replica gown being created by designers Michelle Roth and Henry Roth. Kate Middleton’s dress was kept safely under wraps until the Royal Wedding where it was revealed to be a creation by Alexander Mcqueen‘s creative director Sarah Burton.

Minutes after the world caught its first glimpse of Middleton’s gown, the ‘Roths’ began making detailed sketches for a replica version.

The designers sell their creations exclusively for ‘Kleinfeld Bridal Salon’, the largest wedding boutique in the U.S. According to CBS News, “Kate’s dress is a serious game-changer, and the Roths are determined to have the perfect couture gown, inspired by Middleton’s, available immediately.”

The designers have been busy working on every detail of their “Kate Dress” and have “examined every detail” of the original. They reportedly visited New York’s ‘Garment District’ to find the perfect fabric and soon had women “waiting breathlessly” for their chance to try on the creation.

According to the UK’s Daily Mirror, the New York fashion house ‘Faviana’ are also attempting to cash in on the interest in Middleton’s dress, introducing a gown named “Princess Kate.” The dress, made of satin with chiffon French lace, is now ready for production and is available in two separate shades.  How pathetic.