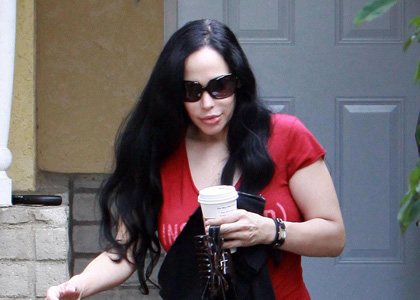 After appearing in a hard core fetish video with a known criminal, Octomom Nadya Suleman is feeling remorse.  In fact she fears that Child Protective Services will forcibly remove her children from her home.  What was Octo thinking when she made the fetish flic?  Did Octo think that wearing a revealing black corset and whipping a man dressed as a baby in her home would endear her to CPS?  Already neighbors complain that Octo’s home is a hellish circus – totally out of control with screaming and fighting going on at all hours.

Octomom says: “I am scared that Orange County CPS will misunderstand my intentions or my parenting abilities and take my kids away from me.”   Misunderstand her intentions?  Her intentions were to make a hard core fetish film and that was what she did.

The man in the video with Nadya, David Gonzalez, has an arrest record and is currently on probation for a variety of crimes, including battery of a spouse, possession of marijuana and failing to provide a child restraint.
Octo blabs on: “I had no idea that he had a criminal record,” adding “I thought he was a professional DJ on a reputable radio station who had come up with a funny idea for a skit.”  In a moment of clarity Octo continued:  “Instead of a lighthearted skit with a naughty edge, it turned out to be a vulgar and unprofessional video that I deeply regret playing any part in.  I was horrified at the end result, and it was not presented as they had promised.”