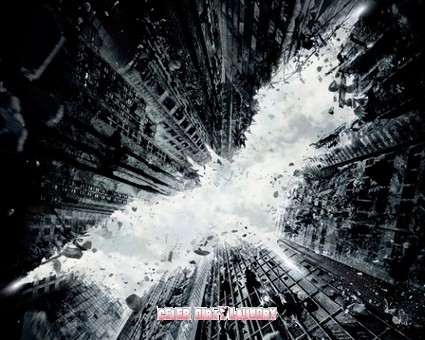 ‘The Dark Knight Rises’ is the third and final installment in Christopher Nolan’s Batman film series.  The film has an estimated budget of $250 million and started filming this year.  The official trailer has hit the Internet, teasing an ominous conclusion to the series.

Not much is know about the film except Christian Bale will play Bruce Wayne/Batman, in addition to Gary Oldman as Gordon, he has Joseph Gordon-Levitt as a new ally in the Gotham Police Department.  Anne Hathaway will play Selena Kyle/Catwoman, while Marion Cotillard will play Miranda Tate, a Wayne Enterprises employee and Tom Hardy will be playing the role of the villain Bane.

Take a look at the trailer below at the end of the trailer — Gotham City’s skyscrapers crumbling down in a shape of the Bat symbol  and it seems to imply that Gotham City might be destroyed while the Dark Knight does rise. What do you think of the ‘The Dark Knight Rises’ trailer? Let us know in the comments below!