OJ Simpson Doing Hard Time In Prison – He Is Getting Fat And Beaten Up! 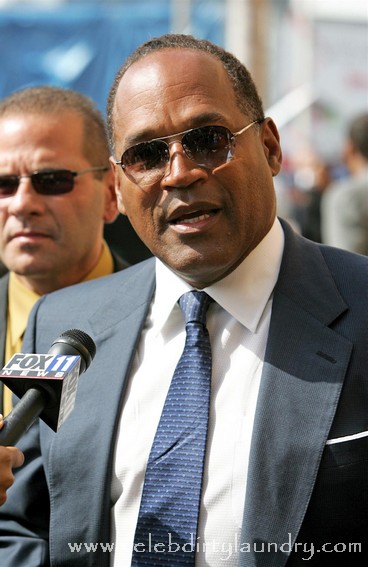 Orenthal James (OJ) Simson might have been found not-guilty for the double murder he committed but he’s paying for it now.  Sources at Lovelock Correctional Center near Reno, Nevada say OJ is a walking heart attack.  The disgraced football legend has packed on 50 pounds, sources say, and his family now fears that he’ll die of cardiac arrest behind bars.

At 6-foot-1, the 63-year-old convict weighed 225 pounds when he entered prison, but now he’s ballooned to a blubbery 275 pounds by pigging out on junk food and going without exercise, a family insider said.

“O.J. is turning into a butterball,” the source said. “If he doesn’t go on a diet, he’s going to die of a massive heart attack in jail.  His kids are worried about him.”

Even Simpson worries that his weight will trigger a heart attack, said another source.

“O.J. is so depressed over his weight that he can’t even take care of himself,” the source revealed.  “He says, ‘I’m a heart attack waiting to happen.  When I leave here, they’ll probably be taking me out in a pine box.'”

Simpson has been locked up since December 2008, when he was sentenced to up to 33 years on charges of kidnapping, armed robbery and assault with a deadly weapon.

His request for a new trial was denied in October, and he’s been deeply depressed since then, said the source.  Simpson is also still suffering psychological effects from being beaten unconscious by a young skinhead in a brutal prison yard attack, the source added.

After the attack, Simpson secretly spent several weeks in the prison hospital before he could return to his cell.  Since then, he’s become a recluse.

“When he arrived, O.J. was a celebrity to many of the inmates.  He always had a smile on his face and spent a lot of time playing cards in a TV and game room on his cell block,” the source said.

“But now he rarely leaves his cell.  He doesn’t want to be around other prisoners except for a few guys that protect him.”

The family source added: “Since his appeal was denied, O.J. now realizes he is likely to be in prison for years and it’s taken a toll on him.  He eats snack food to combat his depression, and he’s really packed on the pounds.  The ‘Juice’ today is a far cry from the guy who ran through airports in those old Hertz rental car commercials!”

We hate to say it but if anyone deserves this sad fate it is OJ.  His arrogance and total lack of value and respect for other people got him to where he is today.