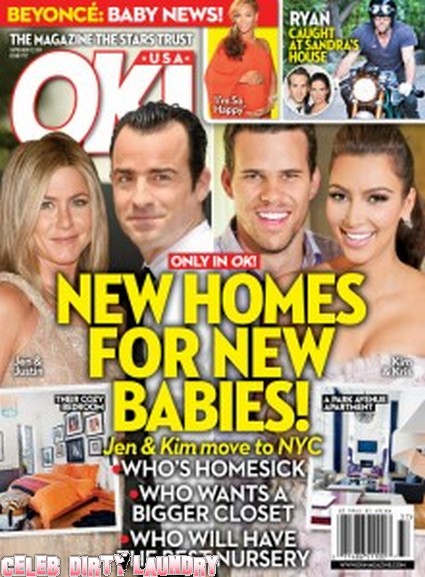 The September 12th issue of OK! Magazine features ‘New Homes for New Babies!, Jen & Kim move to NYC’  The Kim & Jen are Kim Kardashian and Jennifer Aniston.  The magazine speculates that because Jennifer is so in love with her new boyfriend Justin Theroux she is moving to NYC to be next to him so they can start a family.    Of course speculation about Jen being pregnant has been going on for years now and she should have a baseball team by now.  Still the magazine goes on to reveal what a ‘wink wink’ friend has revealed to them:

“She’s doing it the old-fashioned way. She was on the pill but now she’s been off of it for almost a month and her hormones are back to a place where she can conceive naturally. If she can’t get pregnant within the next year with Justin, then she may consider other methods.”

Following their recent marriage Kim Kardashian and Kris Humphries have moved to NYC and one of OK!’s insiders reveals “Kim has babies on the brain.  She wants one immediately.”

If you have to know who is homesick, who wants a bigger closet and who will have a bigger nursery pick up the issue of OK! that will hit stands Thursday!