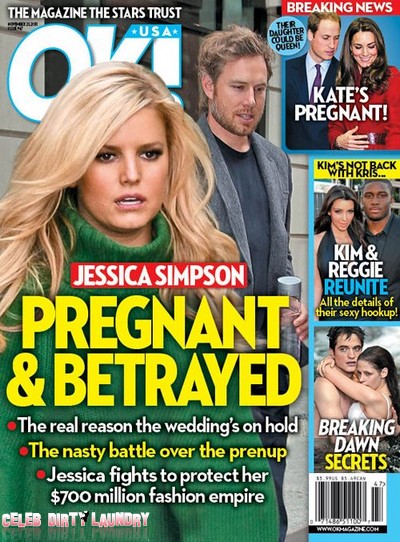 The November 14th, 2011 issue of OK! Magazine features the cover story ‘Jessica Simpson – Pregnant & Betrayed’  The magazine is suggesting that even though this should be the happiest time in Jessica Simpson’s life because she is pregnant it is actually a stressful time for her.   Reportedly her fiancé Eric Johnson is causing problems with his prenup demands.  He wants a whopping 1/2 of her fortune which not only includes her singing career but part of her fashion empire.

OK! has the scoop: “Eric’s completely changed his mind,” an insider tells OK!. “He started dragging his feet, refusing to sign the prenup they’d drawn up; now he’s laying this whole guilt-trip on her about how he believes in true love and she should, too. A lot of people feel she’s been totally betrayed. “

“Eric knows how important it was to her to be married before the baby was born,” says the source. “She wanted to rush the wedding so that her child wouldn’t be born out of wedlock, and she wouldn’t walk down the aisle with this massive bump. And he’s basically used that as a bargaining chip.”

Poor Jessica she has not had  a lot of luck with men.   With her failed romances with John Mayer and Tony Romo and her divorce from Nick Lachey Jessica has had her heart broken many times.

To find out more about Jessica’s wedding woes pick up the current issue of OK! which hits stands Thursday!