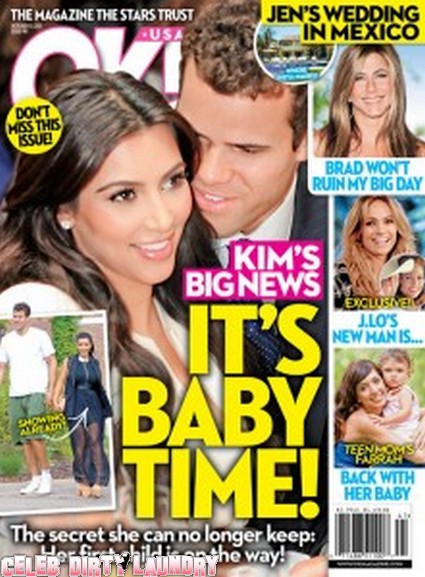 The October 3rd, 2011 issue of OK! Magazine features the cover story “Kim Kardashian & Kris Humphries — It’s Baby Time!”.  The magazine claims that Kim Kardashian is really busy with her new life.  She recently got married to Kris Humphries, moved to New York City and now a baby is on the way for 30-year-old Kim.  Blazoned across the cover ‘The secret she can no longer keep: Her first child is on the way”   This is too funny have you ever seen Kim keep a secret? If Kim was pregnant it would spell big bucks for her and she would be pimping the thing out already.  We would have heard LOL

OK! has more from one of their unnamed sources: “Kim said she’s late! She was supposed to get her period and didn’t.  Kim’s been going through all the K names.  She even has a baby-name book and looks up the meaning of each one.”

The tabloids have speculated ever since Kim got married that she was pregnant.  However, OK! is claiming they have more info to substantiate their claims of Kim being pregnant.

Also included in this week’s magazine they have all the info on how Jennifer Aniston is coping with Brad Pitt’s comments to Parade Magazine last week.  According to the magazine there is nothing to cope with because Jennifer is busy planning her wedding to Justin Theroux.

If you need to find out more about all this and more pick up the current issue of OK! which hits stands Thursday!