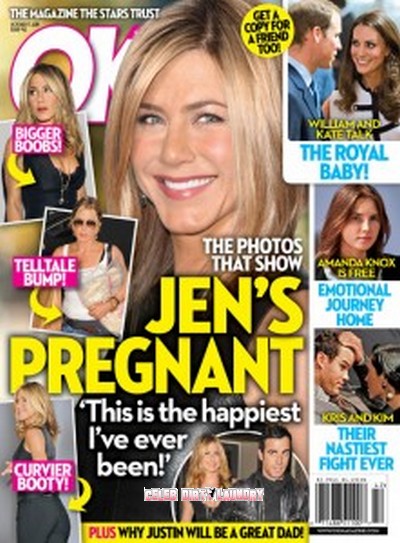 The October 10th, 2011 issue of OK! Magazine features the cover story Jennifer Aniston is pregnant.   The magazine claims to have the photos that show that a baby is on the way.    According to OK!  Jennifer has traded in her usual fitted clothes for loose clothes so she can hide her telltale bump and her curvier booty.  Lets not forget that according to the tabloids Jennifer has been pregnant about 20 times in the past couple of years.

OK! has more:  “She hasn’t announced it, but all of her friends seem to think it’s finally happened,” an insider tells OK!. “Whenever anyone hints around the question, Jen gets really giggly and shy. It certainly has all of her friends buzzing, and Jen seems to be loving it!  If Jen is with child, it wouldn’t be surprising. As one close pal notes, she and Justin share a desire to start a family “immediately.”

Last week the magazine had Jennifer Aniston tying the knot with her boyfried, Justin Theroux.  So of course a baby is the next logical step.   What do you think does Jennifer really have a little one on the way?

Also featured in this issue is  Kim Kardashian and Kris Humphries have had their first gasp oh no, fight!  The newlyweds reportedly have a lot of family tension.   Rumors have circulated for weeks that the KarTRASHian clan are less than pleased with her new hubby.

If you must see all the Jennifer baby pics and find out about Kim and Kris’ financial woes pick up the current issue of OK! that hits stands on Thursday!