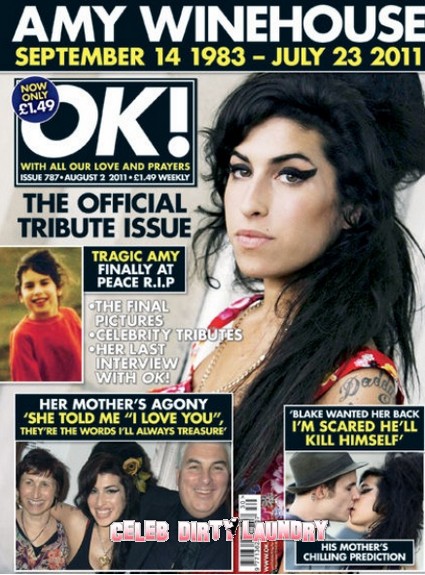 In the August 2nd issue of OK! UK they pay tribute to the talented and tragic star Amy Winehouse following her tragic death this weekend.    With her sudden and shocking death I expect many magazines will have Amy on the covers this week.   The tribute issue contains their last interview with Amy, family pictures and tributes by celebrities.

The magazine claims to include information on: “Amy’s mother’s agony, She Told me ‘I Love You’, Blake wanted her back and Blake’s mother’s chilling predictions.”

Amy Winehouse was laid to rest yesterday in London.  Following the Jewish tradition of having a quick funeral.  The singer’s father, mother and brother and close friends, along with band members and celebrities were among several hundred mourners at Edgwarebury Cemetery in north London.