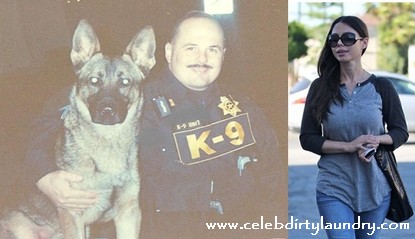 As we reported earlier today Oksana Grigorieva dropped her domestic violence claim against Mel Gibson.  The move was seen as an olive branch being extended to Mel so he would settle their custody case.  We wondered at the time if perhaps someone had been paid off.  In an interview with Celeb Dirty Laundry, Oksana’s ex-Bodyguard Kris Herzog reacts to the news and calls bullsh*t on Oksana ‘extending an olive branch to Mel Gibson’ by dropping her claim of Domestic Violence against Mel Gibson.

Oksana knows Kris Herzog is in Meetings all this week & for the first time ever, he is leaving FULL copies of his book for publishers, producers, directors & screen writers to evaluate for the purchase of the book & movie rights to his life story.

Oksana knows her texts & emails are going to leak, so she is trying to get out ahead of Kris’s book to seem like she is a good person, to appear as if she is extending an olive branch to Mel. Oksana & her Attorney Good People ? No way he says!

Kris claims Oksana and her personal attorney are lying and that will say anything and do anything to settle this case before his book is published !  Furthermore he claims, Oksana is being advised by the attorney who broke up The Dream Team he built to help Oksana, when he still believed Oksana was a victim

Again he emphasized, this recent move by Oksana and her attorney is to get out ahead of his book revealing who she really is.  A Sexual Sorceress with a 27th degree Black Belt in Gold Digging.

Kris claims 100% of every word of his book is backed up by over 1000 texts, emails and photos.  If you want to see a preview of the upcoming book & movie on Kris Herzog, Mel Gibson and Oksana, The Bodyguard, The Movie Star & The Sexual Sorceress go HERE!