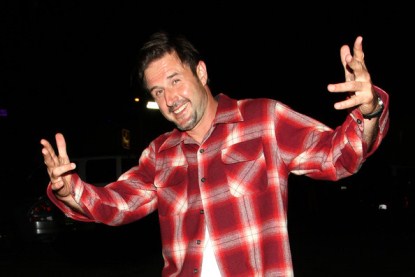 On his way to checking in to Lindsay Lohan’s new home, the Betty Ford center, big time stoner David Arquette decided it would be a good idea to get drunk at a full-contact strip club.

The place was the Skins strip club which features private rooms with beds… I thought this was called a whore house in the old days?  Anyway it seems that David blew in excess of $2000 at the ‘strip club’ paying naked girls who were all over him – according to a source who was at the club  – “Money seemed to be no object for David. In all, he spent more than $2000 I believe, he wasn’t doling out singles, that’s for sure – David appeared wasted and was enjoying himself with multiple dancers all night. The girls were naked and all over him and he loved the attention.”

The source added “He spent several hours at the club and things got very kinky and it was clear to me that he was trying to take his mind off his marriage troubles.”

David and his estranged wife Courtney Cox have been separated since October and he told Howard Stern that he slept with Jasmine Waltz since he has been separated from Cox and that he has been seen partying hard in L.A.   David had the gall to describe his separation from the mother of his six-year-old daughter Coco as the “hardest thing anyone has to go through.”  David added “I’ve been drinking a lot, everybody’s worried and concerned about me… when I drink, I become a maniac.”

What a clown – has David realised that it is his behavior that is the cause of his problems?  Maybe they can teach this guy something at Betty Ford – he sure won’t learn anything useful at the ‘strip club.’