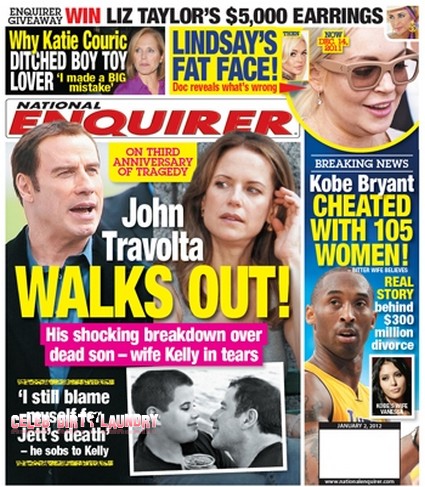 The current issue of National Enquirer features the cover story ‘On Third Anniversary of Tragedy – John Travolta Walks Out.’  The magazine claims that John Travolta had a shocking breakdown over his dead son Jett Travolta.  His wife Kelly Preston was in tears as he sobbed to Kelly,‘I still blame myself for Jett’s death.’

John Travolta’s son Jett Travolta, 16,  died in 2009 in the Bahamas, reportedly from a seizure and hitting his head on a bathtub. His seizures were frequent and as such he was rarely left alone.   He was hospitalized when he was 15 months old with Kawasaki disease, a rare illness that mainly affects young children.   It’s treatable but can have unforeseen complications, including lasting damage to the heart.  Travolta has called Jett “my heart” in the past.

Also included in this week’s issue Kobe Bryant whose wife Vanessa Bryant announced she was divorcing him actually slept with 109 women.  Seems a really good reason to divorce him.  The magazine also claims to have the real story behind their $105 million dollar divorce.

Not to leave Kim Kardashian out this week, the magazine claims that ex boyfriend Reggie Bush’ Mom hates her.   No surprise as to why she would hate Kim !  Rumor has it Kim is on the prowl to get Reggie back!

To find out all this and more, pick up the current issue of National Enquirer!