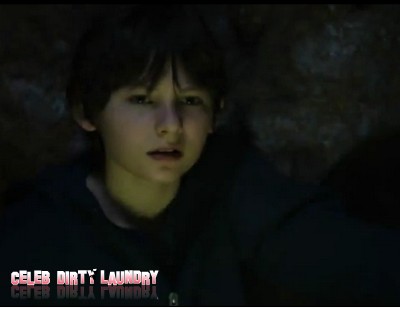 After a one week hiatus Once  Upon A Time is back with a whole new episode.  Tonight is the fifth episode of the ABC hit  Once Upon A Time and it called ‘That Still Small Voice.’  On last week’s episode we met another popular fairy tale character, Cinderella.   In the real world Cinderalla is Ashley a young pregnant woman Emma tries to help escape from the clutches of Mr. Gold.  In the storybook Cinderella made a  regrettable deal with Rumpelstiltskin.

The episode was a very heavy Rumpelstiltskin /Mr. Gold episode. But we found out something interesting the sheriff is actually Regina (Evil Witch’s) lover.  If you missed last week’s episode you can read our official recap here!

Episode synopsis: As Sheriff Graham deputizes Emma, the ground shakes and a giant sinkhole mysteriously appears at the edge of town. But a curious Henry’s life is placed in danger when he decides to explore the innards of the sinkhole to see if its contents can link the inhabitants of Storybrooke to the fairytale world. Meanwhile, back in the fairytale world, Jiminy Cricket yearns to leave the family business and transform into the person he wants to be.

Have you been watching the show?  What did you think? Whose side is the Sheriff on?   Have you figured out yet what storybook character the sheriff is yet?

Tonight’s show:  Tonight’s show open in the fairytale at a puppet show. During the show a young red headed boy is pick pocketing the people watching the show.   He brings what he has stolen to his parents. The boy sees a cricket and he tells the people he stole for that maybe he wants to be good. We find out that he is Jimmy Cricket = people’s conscience.

Over to current time and Henry is talking to his therapist, Archie Hopper. Henry is discussing with the therapist that he is Jimmy Cricket.

The sheriff gives Emma a badge to make it official that she is a deputy.

Regina, the mayor arrives at a site where something collapsed underground. The mayor sees Emma and tells her to leave, that this is town business. Regina finds out Emma is a deputy now. Regina tells the people to fear not she is going to take care of everything. The mayor picks something up and hides it in her pocket – Henry wonders what it is. Regina tells Emma and the Sheriff to cordon off the area. She sends Henry to the car, but of course he does not listen.

Henry calls Emma and Dr. Hopper and tells them they cannot let Regina pave over the hole because they don’t what could be down there – he claims Emma is weakening the curse. Regina comes over and tells Henry to get back to the car. Regina talks to Dr. Hopper and tells him they have to find a new treatment for Henry because his imagination is running rampant.  Regina tells him to take the delusion form Henry’s head and crush it.

Back to the fairytale, Jimmy Cricket (grown up) and his parents are at another area where they are giving their show. Jimmy does not mind to give the show but he wants to stop stealing. Henry comes over to watch the setup of the fair and tells Jimmy he comes to listen to the crickets. It is raining and he gives Jimmy his umbrella and tells him he can’t wait to see the show – and that Jimmy ‘could be somebody else – do something else.’

In current time Gepetto comes to visit Doctor Archie Hopper but he tells Gepetto he is too busy. Henry comes in and tells the Doctor he has figured out something and the doctor tells him everything he thinks is a delusion. He tells Henry he has to wake up and the nonsense must end – else Henry might have to be locked up – but Archie is NOT happy telling Henry this.

Margaret Mary is playing hangman with John Doe.   His wife Mrs. Nolan comes to visit him and Margaret Mary leaves.

Mary Margaret tells Emma that John Doe’s wife is really nice.  Emma tells her not to get involved with a married man that it is not worth it.  Henry knocks on the door and Emma lets him in – he is in tears.  Emma runs over to Archie’s house and she is pissed because he told Henry he is delusional.

Regina calls Emma and asks if Henry is with her and she tells Regina she let Henry off at her office one hour ago.  Meanwhile Henry heads over to the mine that caved in and he is climbing into it.  He is afraid Regina is going to pave it over and ruin everything.

Rumpelstiltskin tells Dr. Hopper once the potion changes them, leave them the way they are and he will come and collect them and he will be free.

Everyone is searching for Henry who is down in the collapsing mine shafts.  Dr. Hopper finds a candy bar so they know Henry was at the collapsed site.

Meanwhile Henry explores the underground shafts and as he is underground the cave starts to cave in.  Emma and Archie who are on the outside call for him and Archie falls in as it caves in.   Archie lights a match and calls for Henry.  He finds Henry and Henry asks if he came to help him, Archie replies no and Henry runs away.

Jimmy and his parents are about to go somewhere to rob and con. They knock on the door and ask if they have a place at the hearth for an honest man. The couple let them in and they start there con about Elf Tonic. They tell the couple that the Elf Tonic helps against the plague, so the couple want the tonic. They give them all their precious goods for the Elf tonic. Jimmy is fed up because the people were good people. Jimmy apologizes to them and throws the potion Rumpelstiltskin gave to them on his parents. Nothing happens, he finds out his parents switched the tonic and the people who helped them took it and they have been turned into puppets.

Jimmy’s parents come in and see the dolls and say ‘new puppets for the act’ The son of the people come in and ask them what they did to his parents.  Jimmy is heartbroken.

Dr. Archie Hopper continues to look for Henry, he finds him and tells him they have to get out of the abandoned mine.    Up above the mine Emma has people trying to get to Henry but Regina tells them they are making it worse.  In the mine Henry sees something. They discover an old elevator. It used to be used to get the mine workers up and down. They are going to try to get it working and do!

Emma tells Regina they have to stop fighting, arguing will accomplish nothing. They decided to use dynamite to blow open the mouth of the shaft. They blast – Regina asks if it worked and Emma tells her it did not – the blast also ruined the elevator escape plan.

Regina asks the workers what was that. She accuses them of almost killing her son. Emma hears the dog barking and the dog goes over to an area on the ground and smells and the dog found an air-shaft.

Meanwhile the workers are removing the cover from the airshaft.

Henry tells Archie he can be the man he wants to be because he is Jimmy Cricket. Henry tells him it is hard for him to hear the voice inside him because of the curse.

Gepetto tells the workers that they have to lower someone down the shaft and Emma volunteers to do it. Regina says it is her son and Emma tells her it is her son too.  Regina finally agrees and tells Emma to bring Henry to her.

Archie asks Henry why it is so important his fairytale story is true. Henry tells him because ‘this cannot be all there is.’ Henry tells him it does not matter he did not find anything and Archie tells him he found him.

They all come out of the air-shaft as the rescuers applaud. Regina hugs Henry and sends Emma to clear the crowd and won’t let her near Henry.

Back to the fairytale Jimmy leaves and stares into the sky and says ‘I wish, I wish’ and a fairy comes to him and tells him she hears his wish and he does not have to wish so loud. She tells him she cannot bring back the boy’s parents. She tells him the little boy will grow up to face many challenges and asks if he wants to help him.’ He tells him he cannot get away from his parents, they are who he is. She asks him if he did not want to be that what would he want to be. She smiles and says she hears his wish. He is turned into Jimmy Cricket. She tells him to find the boy and he will live as many years as he needs to. The fairy tells him the boy’s name is Gepetto.

Emma is looking at Archie talking to Gepetto and asks if it is Archie father and Henry says not just good OLD friends. Henry says listen and you can hear many crickets and Henry says things are changing.
Rumpelstiltskin is looking at the dolls who used to be Gepetto’s folks – then over to Mary Margaret at the hospital, she is handing in her letter of resignation.

At the collapsed mine site Regina drops the magic shard of glass she hid earlier – down down to the bottom of the airshaft.   It lands amid what appears to be a broken shattered magic mirror!!  That’s it for this episode!

What do you think is it the magic mirror she is trying to get rid of??  Sound out in the comments below!