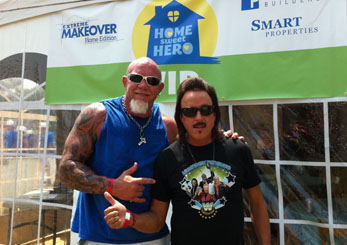 This past year Steve Chamberland helped secure a prosthetic leg for 9 year old Anaiah Rucker, who lost her leg saving her younger sister from being hit by a car.

Chamberland, an amputee himself, knows all too well the difficulties an adult has without a leg, so he decided to help this young girl out.  The leg he secured forever changed her life, but Chamberland was not stopping there.

Sunday, October 9, 2011 Chamberland secured a complete home makeover for the family which will be aired on “ABC’s Extreme Home Makeover“; as they turn her home into a home designed around someone with a handicap, giving her the ability to be independent.

“The first step was making sure she could be mobile again and live her life as a normal 9 year old so by securing the leg that gave her the ability to achieve that goal without the cost” says Chamberland and adds
“the next step is making sure she can be independent around her house, making things more accessible for someone with a handicap and that’s where ABC’s Extreme Home Makeover comes in”