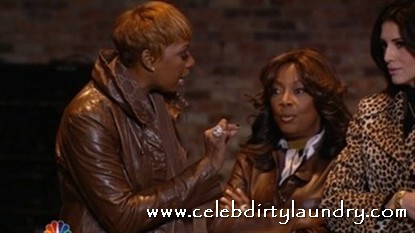 Watching the last few episodes of Celebrity Apprentice I thought I was seeing reruns of old Jerry Springer shows.  Not only were several contestants being amazingly and disgustingly rude but they were out of control – I was waiting for those big bouncers Springer hires aplenty to storm the set and drag people off.

Playboy Playmate contestant Hope Dworaczyk sums it up pretty well when she said “It’s a mess – Celebrity Apprentice looks a lot like the commercials for Celebrity Rehab.”

No argument there.  At least the guests on Dr. Drew have a big excuse for their crazy rude behaviour – they are withdrawing from drug/booze addictions but what are the excuses of belligerent bellowing Meat Loaf or trailor trash/hood rat NeNe Leakes?

We haven’t seen Dworaczyk, who is competing on behalf of Best Buddies, get into any of the show’s ridiculous feuds yet, but she did tell me that she ended up going head to head with, guess who, yes – NeNe Leakes. “I liked NeNe a lot until I had to be her boss,” she said. “I like her a lot until about [tonight’s] episode.  It got a little weird after that.  I had to tell her what to do and I don’t think anybody wants to take direction from someone who is a lot younger than them.”

Dworacyk claims Leakes was completely unpredictable. “One minute she was crying and opening up about herself and sharing something about the past that’s very very personal, and the next minute, she’s yelling,” she explained.“I think you can call it unstable.”

Yeah, but so unstable that Star Jones felt she had to hire a bodyguard to protect her from the Real Housewives of Atlanta star, NeNe.
“It was out of control,” Dworacyk said.“I think if I had been yelled at and attacked the way Nene gets in Star’s face, I would have wanted a bodyguard, too.”

Last week NeNe opened a mouth to delicate La Toya Jackson that proved beyond a doubt that she belongs not on Celebrity Apprentice but as a guest on some cheap trashy daytime revelatory talk show.  The idea that NeNe could possibly be a sharp and effective business person and win ‘Celebrity Apprenctice’ is absurd.

On the men’s side of the boardroom we had Meat Loaf’s swearing tirade against Gary Busey. “I just had a brief moment of total insanity,” the “Bat Out of Hell” rocker said at the GLAAD Media Awards. “That’s the only way I can describe it.”

As maddening as Gary Busey is, and Gary behaves for the most part like an a**hole.   Meat’s behaviour indicates that he is not cut out for a top executive position, unless perhaps as an exec of a professional wrestling concern!

If Donald runs another celebrity apprentice season, given that he’s not too busy running for president, he might suggest an anger management class for contestants as part of the qualification criteria.

Don’t forget to stop by tonight for our recap of tonight’s Celebrity Apprentice!