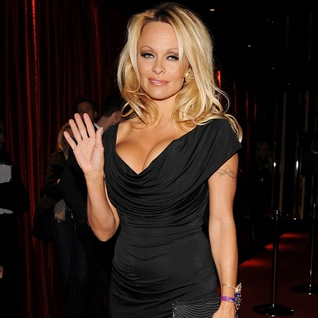 Pam Anderson was playing the Genie in the play Aladdin in Liverpool and acquired a very serious fan – so serious that this chap turned stalker!  A clue that this fellow was going to be trouble was that he had bought tickets to see her in Aladdin 10 times in a row, and regularly waited outside the stage doors to catch a glimpse of Pam.

Pam had finished playing the Genie at the city’s Empire Theatre and was about to begin her journey back to London when the potential assault took place – the man had tried to board her train carriage when police were alerted – but when they approached him, he turned violent and allegedly tried to bite an officer, forcing them to use pepper spray before they arrested him.

Pamela Anderson was left shaken, as you can see below, after seeing the crazed fan pepper sprayed by police after he tried to jump on board her train.

Police said ‘The man became verbally abusive to rail staff he was asked to produce a ticket. British Transport Police attended and the man became violent and assaulted an officer and was arrested. Officers were forced to use capture spray as the man resisted arrest.’

Witnesses said that it was the same man who had been following the star for days during her run at Liverpool’s Empire Theatre – causing her to hire extra security.  They said she had been left visibly terrified by the scenes.

I guess if Pam were really a genie she could have just snapped her fingers or wiggled her nose and the pesty fan would simply have vanished – however as things are she will stick with enhanced security!