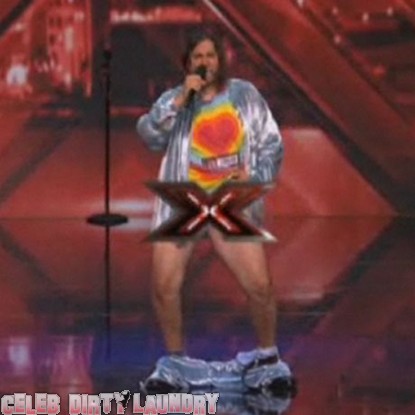 In case you’ve missed Wednesday night’s premiere of The X Factor, we’ll bring you up to speed. This loon, Geo Godley, took the stage to perform a song called I’m A Stud.

In order to convey his message, he decided to undo his belt and show the world his junk. He let it all hang loose, causing the judges and the audience to be disgusted. It was so bad that even Paula Abdul left the judge’s table to go puke in the bathroom.

Now, the Parents Television Counsel is having a conniption fit over the live penis exposure. The president of the organization has fired off a letter to the FCC saying that crap like that shouldn’t be on television. While he’s right, the network did cover up the guy’s junk with an X Factor logo, so the only ones who were truly offended were the audience.

PTC Prez Tim Winter said, “If Godley performed his act in public, he would have been arrested. But if he performs it in front of a Fox camera, his act is beamed via the public airwaves into every home in the nation.”

He went on to say, “The prolonged, previously videotaped footage of a contestant dancing nude on the X Factor stage represents a conscious decision by the producers – with the approval of the network’s broadcast standards department – to intentionally air this content in front of millions of families during hours when they knew full well that children would be watching.”

He also said that the act was “patently offensive” and it’s a violation of Fox’s broadcast licenses. He’s also calling upon the Content Ratings Review Board to investigate this heinous act and hold Fox accountable for violating the ratings system.

What do you think? PTC Vs. The X Factor? You know Simon Cowell doesn’t care…it’s all about ratings to him…as he’s sitting back in his posh house, puffing on a cigarette and laughing his way to the bank. We’re talking about the stuff that happened on his show, that’s what matters to him.

Update: Geo Godley has issued a statement, saying that he wasn’t naked….he was wearing a g-string.