Paris Hilton At The Airport in France With DJ Afrojack – Photos 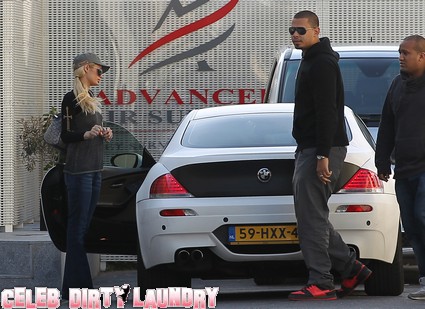 Paris Hilton arrived at the airport in Paris, France with DJ Afrojack on August 31, 2011 as they take a flight to the Island of Mallorca.  Paris has been busy working on her latest project, a house music album in the studio in Paris, France.  Paris tweeted today: “Just landed in Mallorca with @DJAfrojack! Ready for a fun night! I love Spain! :)”

Paris is running her own fashion empire, jetting around the world and now she is working on an album with DJ Afrojack.   She definitely is a busy girl!  This album would be the follow-up to 2006’s Paris, which reached number six on the US album chart and gave birth to her UK top five hit ‘Stars Are Blind’.

She recently said about the new album “It’s pop and a little more house music, as well. Dance.”  When asked about when she would release the album she said: “A few months, maybe this summer. It’s a lot! I am so busy!”