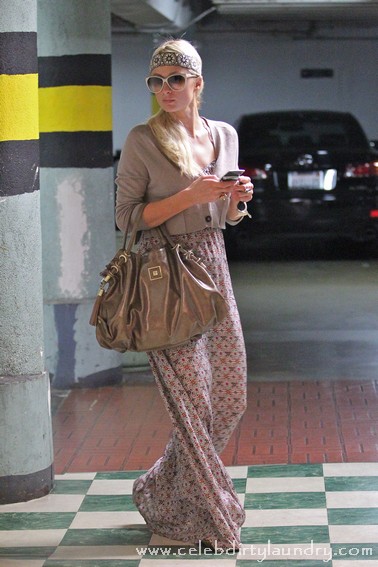 A solo Paris Hilton was doing her favorite thing yesterday March 16th, 2011 shopping!  Paris was wearing a headband and a long dress channelling her inner hippy during her shopping trip in Beverly Hills, Los Angeles.  Unusual conservative attire for Paris who usually likes to slut it up.   What do you think is Paris rocking the hippy look?

Paris, 30, who is dating Cy Waits for one year now recently said that Cy is the best boyfriend she has ever had and would love to start a family with him.  Paris’s parents are hoping that she settles down with Cy.

Meanwhile Paris Hilton’s new Oxygen reality show, The World According to Paris, commences in April, and according to the Paris, Brooke Mueller and Charlie Sheen‘s custody battle will be featured prominently.  Apparently Brooke will talk about some of the Charlie’s craziness from her perspective.  I can just imagine how that will drive Charlie crazy!