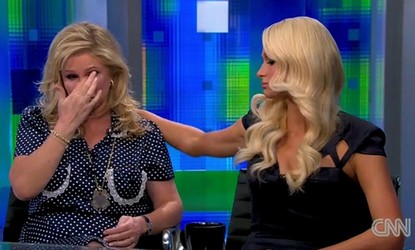 Paris Hilton told  Piers Morgan, with her mother Kathy sobbing beside her, that she never intended her ‘one night in Paris’ sex tape to be released over the internet!

Paris, was talking about the release of the sex tape with former boyfriend Rick Salomon in 2003:

“This is not what I planned. I didn’t want to be known as that.  And now when people look at me they think that I’m something I’m not just because of one incident one night with someone who I was in love with.  People assume ‘Oh, she’s a slut’ because of one thing that happened to me and it’s hard because I’ll have to live with that for the rest of my life and explain it to my children.  And it’s something that’s changed my life forever and I’ll never be able to erase it.”

She told former Britain’s Got Talent judge Piers that she was in Australia when the tape was released and was “in shock” when she saw a clip of the video.

It had been made two years earlier in 2001, when she was 20.  Paris added that the incident was “the most embarrassing, humiliating thing” that has ever happened in her life.

Kathy, who wept as Paris spoke about her ordeal, said Paris didn’t leave the family’s New York home for three months after the tape was leaked and revealed that the family had therapy to cope with what had happened at the time.

Saying she felt “so betrayed” by Salomon, Paris added that she thought he is a “very bad person”.  She said: “This was not some random guy. This was someone I was with for a few years.”

Meanwhile, hotel heiress Paris said she’s “never been happier” than she is with her current man Cy Waits.  She’s been dating the businessman and entrepreneur for over a year.  Paris told Piers: “He just makes me feel so safe. He’s so loyal and he’s my best friend. He’s an incredible man. I’m honestly lucky.”