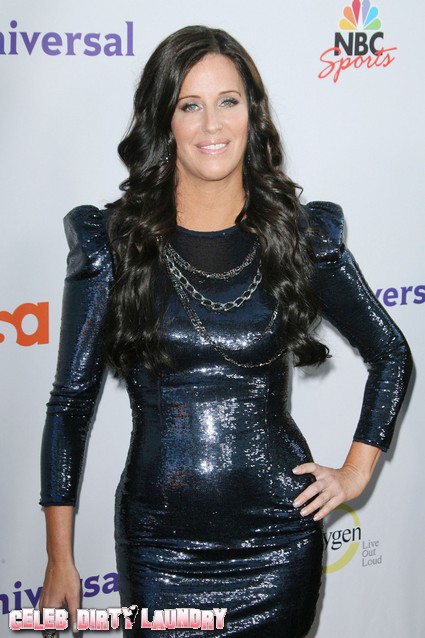 ‘Millionaire Matchmaker’ Patti Stanger wants Jennifer Anniston to break up with her boyfriend Justin Theroux.  Jennifer Aniston and her man Justin Theroux might be enjoying a great romance but Patti has a dire warning for Jennifer: Watch out, because “something’s not right there.”

Patti says that she thinks the couple might need to slow down their relationship.  Patti says ‘I kind of like him, but here’s my problem: he was with the last girl for 15 or 16 years and one day in walks the girl of his dreams and he says bye, see ya, wouldn’t want to be ya! There’s a karmic payback for that.’

One would think that getting stuck with Jennifer Aniston and having to listen to her whine about Brad Pitt all day WAS the karmic payback.

Patti blabs on: ‘He’s handsome and he likes her and she likes him, they’ve got good body language, so it’s a matter of what really went down that he jumped ship from this girl he lived with for 16 years, something’s not right there.’

Heidi Bevins was Theroux’s girlfriend until Jennifer nabbed him – and Patti says that this is hypocritical behavior on Jenn’s part:  ‘She bitched about Angelina stealing Brad from her!’

Patti has concerns about Justin – ‘This isn’t a poor schmuck. This is a guy who produces a lot of movies he’s doing major movies this year, he’s acted. He can afford to get his own place.’  ‘That tells me he jumped ship from one girl to the other. Then he moves in with her in LA, now they’re looking for a nicer house, it’s moving a little too fast.’

‘I think he had enough money he could have moved out to L.A., he could have gotten an apartment see how it goes and gone slower. She might be moving too fast she might get hurt, burned.’

What really pisses off Patti is that she didn’t get any commission on the match.