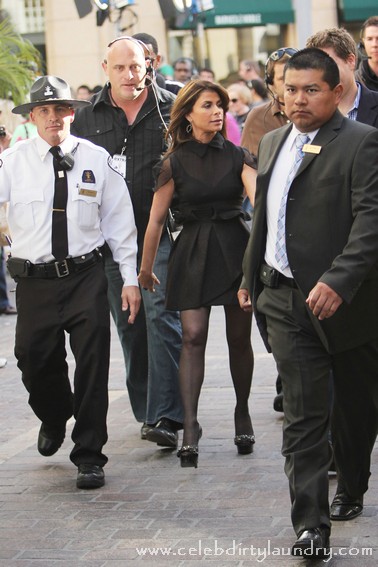 Former American Idol judge Paula Abdul, 48,  filming an interview for entertainment television news programme ‘Extra’ at The Grove in Hollywood Los Angeles, CA Tuesday February 8th, 2011.  Apparently Paula showed up for the interview one hour late and she cancelled a question and answer period with the audiance and refused take photos with fans.  Not exactly the nicest behaviour for Paula who is trying to promote her new dance show called Live to Dance.

Meanwhile rumor has it Simon Cowell is after Paula to be a judge on X-Factor US.  He recently admitted that he had been speaking to Paula about it since she left Idol but no decision has been made yet.   Simon recently said about Paula and the search:

“I’m a massive fan of Paula. We’ve been in regular contact. I’m not going to say who we are going to confirm or not because the truth is we haven’t made up our minds up yet. It comes down to who I think is interesting and the commitment and the expertise each person offers.”

We can expect to see that decision in 3-4 weeks.   What do you think?  Would Paula make a good X-Factor judge?