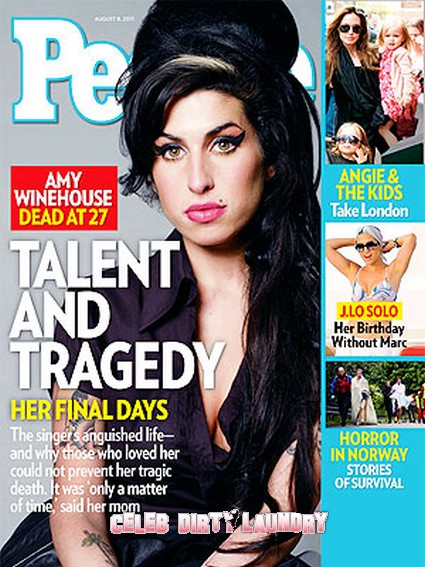 In the August 8th issue of People Magazine the cover features Amy Winehouse ‘Talented and Tragic Her Final Days. The singer’s anguished life-and why those who loved her could not prevent her tragic death.  It was only a matter of time said her Mom.’  As I mentioned in an earlier post today I suspect most magazines will have Amy on the cover after her sudden and traffic death.

According to People this week many people jumped to the conclusion that drugs were the cause of her death but Amy was actually leading a surprisingly low-key life.  She spent time with her family, mother, friends and had regular doctor visits.

The magazine claims that : “Those who knew her say she was much more than a party girl.  She spent most days at home writing.  Beneath the disheveled beehive and heavy eyeliner was a slyly hilarious potty-mouth who loved to cook. “Amy was a sparkly character,” says Sarah Hurley, landlady of the Good Mixer, one of Winehouse’s favorite pubs. “

Also in this week’s magazine Jennifer Lopez her birthday without Marc and Angie and the kids take London.  To read more on this issue pick up a copy of People Magazine!