People: Ashley Hebert: ‘I’ve Never Looked Back for a Second’ 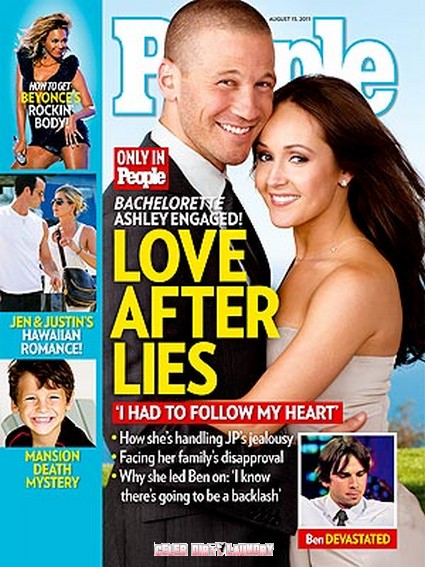 In the August 15th issue of People Magazine the cover features Ashley Hebert, 26, ‘Bachelorette Ashley Engaged, Love After Lies.’  The current season of The Bachelorette is over and Ashley finally chose her one true love.  J.P. Rosenbaum got down on one knee and popped the question to Ashley Hebert, he presented her with a beautiful Neil Lane ring.

Ashley was put through the ringer on show as she followed the yellow brick road to lifelong romance.  That road had its fair share of potholes, bumps but Ashley claims she would have it no other way.

She told People: “I’ve never even looked back for a second on my decision.  Our relationship really started after we left the show.  The show made us stronger than if we’d met on the outside.”

Furthermore according to the magazine Ashley credits J.P. with helping her get over her failed romance with Bentley Williams.   J.P. said it was difficult watching her with the other men on the show but Ashley claims talking about it and their open communication has helped them deal with it.  To read more go visit People magazine!