People: Inside The Brad Pitt and Angelina Jolie Family 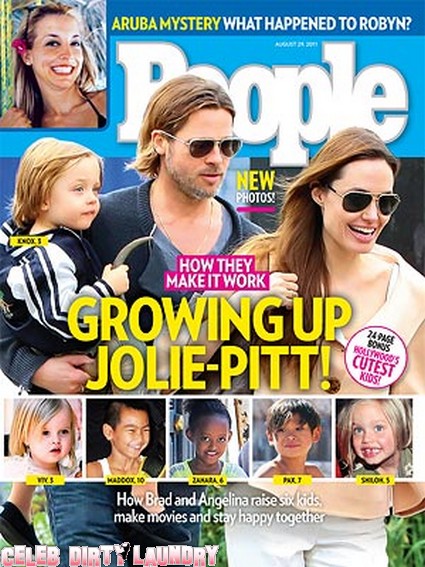 On the August 29th issue of People magazine they feature Angelina Jolie and Brad Pitt and ‘How they Make it Work – Growing Up Jolie Pitt.  How Brad and Angelina Raise six kids, make movies and stay happy together.’  Well this is a change for the magazine generally we are treated to rumors that Angelina and Jolie are breaking up.   I guess now that they have been together six years the magazine has decided they are happy and their relationship works.

The magazines source says : “The children are always playing, jumping on each other and sharing fun moments.  They share a special bond.”  Leading the pack: oldest son Maddox, 10, who “is almost like a teenager now, the way he understands things,” says another source. “He’s grown up very quickly.”

Having six children must be a chore but with them all growing up things have calmed down in the Jolie-Pitt household.  Meanwhile the family is in Scotland where Brad is shoot scenes for his new film World War Z.   Yesterday it was rumored that the family rented a private train to go from London to Glasgow, Scotland to be with Brad.  Must be nice!

The magazine also contains a special 24 page bonus of Hollywood’s cutest kids.  The magazine hits stands Friday and if you want to learn more about the Jolie-Pitts pick up a copy!