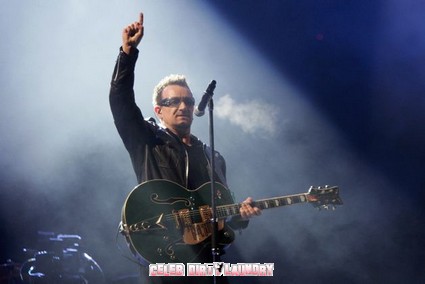 Art Uncut demonstrators protested last night as U2‘s much anticipated performance at the Glastonbury Festival.  They were protesting U2’s tax dodging and had  a huge sign that said: “U pay tax 2?” The group believes U2 moved their finances from Ireland to Netherlands it was to avoid taxes.

The plan had been for the group to float their sign, which also depicted a bag of money, from an Ireland flag to a Dutch one.  When the sign was unrolled they were wrestled to the ground by a 10-strong team of security guards before deflating the sign and removing it.  Security guards wrestled the protesters and pinned some to the fence.  U2 fans watching thought the heavy handiness was a bit over the top and unnecessary.

Protesters said: “That was totally over the top. He threatened to hit me.  U2’s multi-million euro tax avoidance is depriving the Irish people at a time when they desperately need income. There is also hypocrisy here with Bono being so well known for his anti-poverty campaigning.”

None of the protestors were arrested.  Festival organiser Michael Eavis said he believes the protest was unfair, pointing out that the band regularly give generous amounts of money to charity.