People: Was Kim Kardashian’s Marriage A Fake Or A Mistake? (Photo) 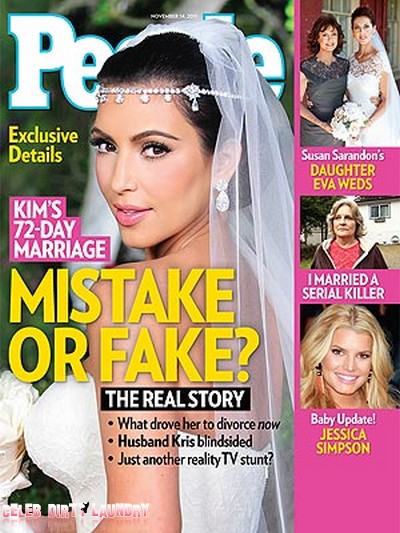 The November 7th, 2011 issue of People Magazine features the cover story ‘Kim’s 72 Day Marriage – Mistake or Fake.’   Kim Kardashian filed for divorce from her husband of 72 days Kris Humphries this week.  Rumors have circulated the web for weeks not that the marriage was a fake and it was all about the month.  The magazine claims to have the details of what drove Kim to file for divorce so soon.  They also claim that the marriage was just one big television publicity stunt.  Of course it was LOL!  Of course Kimmie has written her own excuse as to why the marriage broke down and you can read it here.

People has more: “Those close to Kardashian, 31, insist that her dream of marrying her Prince Charming at age 30 led her down the wrong path – to the altar. “She’s a hopeless romantic and she felt like she got her fairy tale when she turned 30,”  But it didn’t take long for the excitement of the engagement, and their $6 million wedding, to wear off.  A month into New York [after the wedding], she knew she had made the wrong decision.”

Throughout their whole engagement they were so excited for what was to come and their life together,” says another close Kardashian source. “But once they slowed down and settled into ‘real life,’ it became apparent that this wasn’t what they both thought it was.”

Give me a break what probably happened is Kim was sure she had a robot that would stand by her side, look pretty, smile and not think.  However, Kris started to get ideas that he wanted to be in the limelight too and Kim could just not have that.

To find out all the details on the split, pick up the current issue of People!